Skip to main content and our Accessibility Statement may be found in the footer of our website.
Our Response to COVID-19 & Important Visitor Information
Back To Home

Call for a Referral

This year’s parade – “Rolling through the Decades” – is being held at 6:30 p.m. on Friday, Dec. 7. The annual event brings together local businesses, groups and families.

Emanuel can certainly relate to this year’s theme because the hospital has been rolling through the decades and serving the Turlock community for more than ten decades. 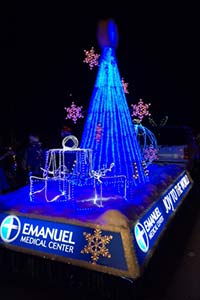 Emanuel’s float will be representing the 1970’s – an era that brought us a robot named R2-D2 from a galaxy far, far away. R2-D2 had spunk, was smart and worked well with his human friends, Luke and Leia, similar to how robotic-assisted technology works nowadays. In the operating room, robots are driven by a physician to perform surgeries with more precision. Technology that seemed to only exist in a galaxy far, far away is here today and available right in your own backyard.

Emanuel Medical Center has been utilizing robotic-assisted surgeries for orthopedic procedures for more than a year, and will soon be adding more advanced technology to help make minimally invasive surgery options a reality for more people with its new da Vinci Xi Surgical System.

The system can be used across a spectrum of minimally invasive surgical procedures and has been optimized for multi-quadrant surgeries in the areas of gynecology, urology, thoracic, cardiac and general surgery.

The new system offers three dimensional high definition visualization and allows for enhanced dexterity and greater precision and control for the surgeon. The surgeon is 100-percent in control of the robotic-assisted da Vinci System, which translates their hand movements into smaller, more precise movements of tiny instruments inside the patient’s body.

For this year’s Turlock Downtown Christmas Parade, Emanuel’s float will feature some fun robots including a Christmas robot, R2-D2 and BB-8.

As Emanuel continues to unveil its new da Vinci Xi Surgical System, the hospital will be asking local children for help giving it a name. Be sure to look for the “Robot Naming Contest” forms being distributed to Turlock Unified School District elementary students. The forms will also be available in the Turlock Journal throughout December.

Also – be on the lookout for opportunities to meet the robot and take it for a test drive in the coming months.

Emanuel Medical Center is proud to be rolling through the decades, caring for Turlock and the surrounding communities with Technology to Heal and Compassion for Life for more than 100 years. Emanuel is your community hospital and is here to meet your expectations of exceptional healthcare.